As student protests continue in the streets of Santiago, we ask if the government will heed their demands for equality.

It became known as the Chilean Winter. For several months last year tens of thousands of students from high schools and universities across the country organised sit-ins, large marches and even a massive choreographed street dance. 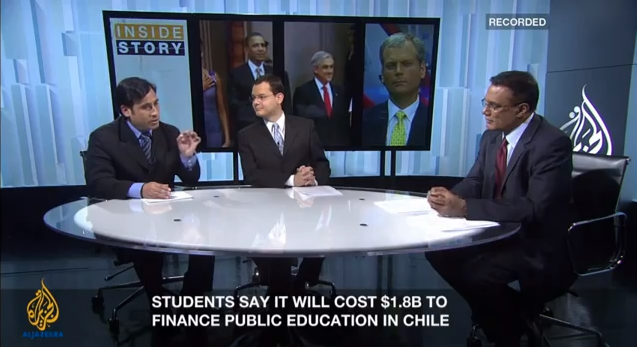 They were demanding a free education system for all.

Chile’s education system is one of the most privatised in the world. And, when adjusted for the average income, the country’s universities are among the most expensive.

As the protests grew, the popularity of Sebastian Pinera, Chile’s centre-right president, declined to the lowest level of any Chilean leader in modern history.

This week the government announced some reforms, including a reduction in the interest rates on student loans.

On Chilean TV a defiant Pinera argued that his reforms will make a real difference: “This is a profound change. What it seeks to do is to transform education into a large-scale mechanism for the creation and equalisation of opportunities, for both quality and equality.”
But protesters say the measures do not go far enough. They resumed massive marches vowing not to stop pushing until their demands are met.

Camila Vallejo, one of the most prominent student leaders, says the government’s promises are not enough: “What is perverse about this system is that it was necessary to eliminate private banks from the agenda, but that doesn’t resolve the problem of profiting from education. The student financing proposal by the government just reinforces the subsidies for those who profit from educational institutions.”

So, what is at stake for Pinera as the protest re-ignites? Should the government do more to satisfy the demands of the students?

Joining presenter Anand Naidoo on Inside Story Americas to discuss this are guests: Patricio Zamorano, a professor at George Washington University; Juan Carlos Hidalgo, a Latin America analyst at The Cato Institute, a Washington DC-based think tank that promotes free market policies; and Eric Farnsworth, the vice-president of the Council of the Americas.

COST OF EDUCATION IN CHILE: